skip to main | skip to sidebar

LIVBLUE: OR IV: The Mother Hips 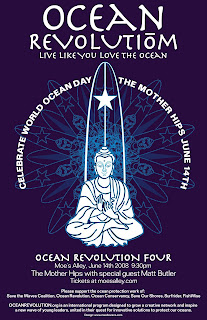 The fourth annual Ocean Revolution celebration will be held at Moe's Alley in Santa Cruz on June 14, to celebrate World Ocean Day. The Mother Hips will be headlining with special guest Matt Butler, starting at 9:30 pm. The event will offer a chance to get up-and-close with local, national and international ocean conservation groups and their leaders, to celebrate the ocean in a rocking atmosphere and to explore ways in which we can all live like we love the ocean.

The event is organized each year by Santa Cruz locals Dr. Wallace J. Nichols, OCEAN REVOLUTION founder and Ocean Conservancy Senior Scientist, and Will Henry, renowned photographer and Save the Waves Coalition founder, who are joined this year by many other ocean activists.

"After four years this celebration is something lots of ocean-loving people look forward to. There's no better place to celebrate World Ocean Day than Santa Cruz, the heart of the Ocean Revolution," says Nichols.

"The Mother Hips' lead singer and guitarist Tim Bluhm has proven his ongoing dedication to ocean protection over the past few years," adds Henry.

The band has headlined three out of four OCEAN REVOLUTION shows and also played at the May "Life is a Wave" benefit concert in San Francisco. The event raised over $25,000 for Save the Waves Coalition.

OCEAN REVOLUTION is an international program designed to grow a creative network and inspire a new wave of young leaders, united in their quest for innovative solutions to protect our oceans.

Save the Waves Coalition is a non-profit that works to preserve surf zones internationally, and is based in Davenport.

For more information, contact Will Henry at will@savethewaves.org or 831-818-9292
Posted by OCEANREVOLUTION.org at 2:44 PM

This blog runs on donations

Tell us how you LIVBLUE

OCEANREVOLUTION.org
is a global movement of people and organizations working for the common cause of a healthy, wild, productive planet. Simple.